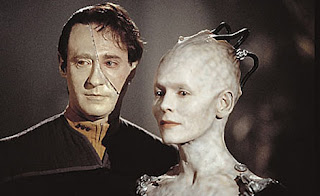 I’m by no means a “Star Trek” nerd. I’ve enjoyed the show (Original Series and Next Generation) and I’ve seen all the films, but I can’t rattle off facts and episode titles as easily as I can Oscar trivia. The first “Star Trek” film I saw in the cinema was Star Trek: First Contact and I thought it was fantastic straight away. I’ve seen it several times since and I still have to agree it’s not just a good “Star Trek” movie – it’s a good movie.

One of the great things about “Star Trek” has always been its reliance on philosophical ideas and problems to sustain its stories. This was originally in spite of a very low budget on the original series. Even the nadir of “Star Trek” films – Star Trek V: The Final Frontier – at least starts with the premise of an interesting idea, although the realization and execution are dreadful.

First Contact begins with one of the most interesting enemies created for the series – the Borg – who were represented in “The Next Generation” series several times. The film follows on from an episode in which Captain Picard (Patrick Stewart) is assimilated into their collective. I was and still am ignorant of that episode, a fact which has in no way diminished my appreciation for and enjoyment of the film. That in itself is one of First Contact’s greatest assets.

During a large-scale battle between The Federation and the Borg, a Borg ship travels back in time to the mid 21st century to assimilate earth and ultimately stop first contact between an alien vessel and Zefram Cochrane, the inventor of warp drive. “Star Trek” has not often done time travel very well and here a pat and contrived explanation is given for why the Enterprise still exists after the Borg have changed history. Nevertheless, they follow them back in time to 2063 and the rest of the film has its conflict divided into two parts. First is the attempt to locate Cochrane (James Cromwell), whose test flight led to the unification of humanity around the common goal of universal exploration. The second is the faction of Borg who secretly beam aboard the Enterprise to assimilate her crew.

The Borg as an enemy are fascinating, if somewhat limited. Their hive mentality drives them forward with a singleness of purpose. This presents some of the film’s creepiest moments when the crew have to occasionally move in close proximity to Borg drones that have no interest in them, yet the threat of sudden attack is palpable. But the refusal to deviate from a task unless threatened and the blind emotionless conquering of individuality can only take a story so far which is why they’ve been given a queen (Alice Krige).

The android Data (Brent Spiner) is taken captive in an attempt to graft organic flesh onto him so he can attain a deeper level of humanity – they are quite literally tempting him with flesh. So the central conflict that’s established is between those beings that believe perfection can be attained and those who strive for it with the recognition that it’s an ever-moving goal line. Picard describes the economics of the 24th century as being about the quest “to better ourselves.” The Borg Queen talks about perfect beings and wants Data as part of her army because of his unique capabilities. Data himself is often trying to be more human with his emotion chip, which he can conveniently switch on and off prompting Picard to remark, “There are times when I envy you.” Emotions – the very thing that separates man from machine – are something that gets in the way. For Picard it’s enviable to be able to disengage that part of ourselves.

As if this weren’t enough heavy lifting for director Jonathan Frakes (who also plays Commander William Riker), the story also brings in a Moby Dick themed revenge element as Picard blindly insists on staying the course to fight even when all seems lost to the Borg. It takes a woman named Lily (Alfre Woodard) who is not part of his crew to open his eyes to the metaphor (the irony being that Lily never read the book while it was one of Picard’s favorites). Lily is from the 21st century earth below and a friend to Cochrane. While Picard, Worf and Data fight the Borg on the Enterprise, Riker, Jordi and Counselor Troi contend with a reluctant hero on the ground below.

The film’s second big theme, which deals with how we view our historical heroes and to some extent connects with the endeavor for perfection, emerges on the earth. Cochrane doesn’t like continually hearing about what a great man he is in the eyes of future generations. How would someone digest the knowledge that one day in the future there will be high schools named for you, chapters of text books bearing your name, and a giant bronze statue depicting you as a visionary? Maybe that would be all well and good for someone genuinely trying to make history, but for Cochrane it’s all phony because he knows the truth – he’s a drunk who invented a warp ship as a means to fast money.

There are those people who are happy to idolize our historical heroes – men like Thomas Jefferson, Abraham Lincoln, Theodore Roosevelt – and those who love to find their faults in an attempt to deflate the myth. Yes, we know Jefferson had affairs and illegitimate children with one of his slaves. No one is without flaws, but can we forgive those faults, however glaring, if the person in question does things great enough to outweigh the moral damage done by them? In the case of Zefram Cochrane it doesn’t matter who he was before his historic flight. History judges him by his deeds from that point forward. “Don’t try to be a great man. Just be a man and let history decide the rest.” Riker relays that quote, attributed to Cochrane, to the man himself in a moment of self-doubt. It’s the last in a series of semi-comical moments of truth for Cochrane and the one that helps him move forward with history.

First Contact is a far cry from Generations, made two years prior, but also written by Brannon Braga and Ronald Moore. They certainly didn’t phone this one in like their first stab at a “Star Trek” feature film screenplay. As a director, Frakes handles the action like a seasoned veteran. He keeps the two parallel action threads at a perfect tempo and cuts back and forth between them at just the right intervals to keep us moving along with the story. Also, unlike Generations, Braga and Moore find enough to do for all the principal characters. Even Counselor Troi, although she could have been left out without really being missed, doesn’t ever get on my nerves with her faux empathetic feelings. Data and Worf in particular are two well-drawn characters in First Contact, each given a lot of action scenes and provided real development as – yes, I’ll say it – humans.