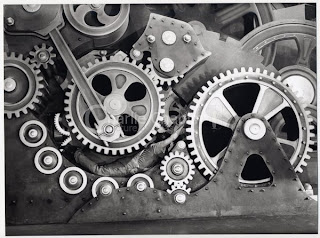 At a time when synchronized sound was the standard in moviemaking, there was increasingly less room for the silent stars, especially comedians who relied so heavily on pantomime to make their comedy work. Charlie Chaplin’s Tramp character was universal in being voiceless and without language he had no firm ties to a particular geographic location. He could be Russian or Japanese or Brazilian. The sentimentality of his stories could be understood anywhere in the world. Chaplin’s last completely silent feature film, City Lights, was released in 1931, four full years after Al Jolson’s profession, “You ain’t heard nothin’ yet,” in The Jazz Singer ushered in a new era for motion pictures. Chaplin made Modern Times between 1932 and 1936 and though it is for all intents and purposes a silent film, it does utilize sound effects, a synchronized musical score and some spoken dialogue. It was Chaplin’s way of sticking to the type of film making he knew best while giving a small tip of the hat to the new mode.

Modern Times was Chaplin’s most ambitious film to date, combining his unique brand of pantomime choreography, classic comedy, emotional pathos, and timely comments on the industrialization and mechanization of humanity and the dire economic situation of the early 30s. Our Tramp starts out as a factory worker, a mere cog in a Henry Ford-style production line in which he stands in one spot tightening bolts that whizz by. One hiccup can throw off the entire process, costing the company and the Big Brother-like President money. The President looks down upon his factory and workers through a two-way TV screen (it should be noted that the film precedes both widespread use of television by several years and George Orwell’s landmark novel 1984 by more than a decade). All the repetitive action leads to a nervous breakdown through which he repeatedly tries to tighten everything he sees. This lands him in an asylum after which he is released, but a series of misadventures continue to land him in jail, including accidentally leading a protest of Communist dissenters, preventing a jailbreak, working briefly in a shipyard and of course meeting a beautiful young woman (played by Chaplin’s third wife Paulette Goddard). In typical Tramp fashion, most of his experiences are the result of his naiveté – an innocent inability to see what’s really happening in the world around him.

Chaplin uses sound effects and dialogue sparingly. The only effects heard on the soundtrack are produced by machines. The only dialogue we hear comes through mechanized means: a phonograph record; a directive from the boss via television. Chaplin’s voice is heard for the first time in any of his films, but in song during a musical number. It is not dialogue, but another form of musical accompaniment for his comedy. Modern Times is a film that is aware of the sea change that the sound era represented to the artists who flourished in the silent era. As such, the machines are what cause the Tramp’s first downfall in the film.

More than being a treatise on changes in lifestyle, the film is also funny, sometimes hilariously so. Again, Chaplin created indelible classic images such as the automaton that feeds a hapless Tramp, shoveling food and soup into his unwilling mouth. Then there is the famous sequence in which the Tramp, in a reversal of the automated feeding machine, becomes the food for the machine, being spat through oversized gears. The human Tramp literally becomes part of the machine, a perfect image of the futility of resistance to technological changes.

The beauty and poignancy of this, Chaplin’s last film featuring the Tramp character and his last before succumbing to the onset of the ‘talkies,’ is how the Tramp’s predicaments so often parallel Chaplin’s own reluctance to allow new technology to affect his movies. So in a way, Chaplin’s commentary is not only directed at the mechanization of work life, but also the changes that would forever alter an artistic medium he adored.
at April 02, 2012