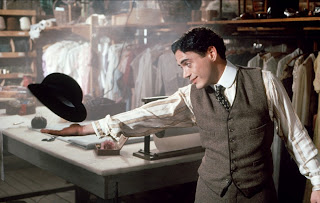 The problem that plagues most biographical films is the way they try to encompass far too much. In my experience, the best films about historical figures have honed their stories to focus on one period in their lives or on one particular aspect. It’s nearly impossible to depict an accurate sense of a person’s life in the space of a feature film. How do you distill what usually fills several hundred pages of printed words to a story that fits into so short a time span? Richard Attenborough tried it with Gandhi and though the result is a well-regarded film, it is also remembered by most people (myself included) as more than a bit boring. Several of Attenborough’s films focus on real historical figures, but his next straight biographical film was Chaplin in 1992.

Chaplin’s greatest success was the casting of Robert Downey, Jr., in the title role of the renowned silent film artist. Before then Downey had been known mostly for his light romantic comedy roles, but this was his first opportunity to play serious drama. Downey’s imitation of Charlie Chaplin’s comic performances is uncanny. He nails the physicality and the beautifully choreographed sequences with impeccable precision.

The screenplay by William Goldman, Bryan Forbes and William Boyd is based on both Chaplin’s autobiography and Chaplin expert David Robinson’s biography, Chaplin: His Life and Art. These two books together combine for the most comprehensive look at the man’s life. Robinson is the foremost authority on Charles Chaplin after the man himself. But there is so much in the man’s life from his Dickensian childhood on the streets of London with a mother who performed in the music halls to his meteoric rise to stardom in Hollywood and then his calamitous downfall in the face of accusations of being a Communist and finally his exile and final stages of life in Switzerland.

Chaplin’s childhood was full of sadness. He had an alcoholic father who died when he was a teenager and a mother (played by Chaplin’s real life daughter Geraldine) who descended into madness, leaving Charlie to become a ward of the state who spent the better part of his youth in orphanages. Knowing this about his early life makes it clear with little certainty that he drew a great deal of artistic inspiration for some of his films from these experiences. Later as a young man, the film dives right into his popularity on the music hall stages of London playing physical comedy, the highlight of which is a middle-aged drunk who stumbles into the performance. At this time Chaplin was contracted with Fred Karno who sent him on a United States tour where he first became fascinated by motion pictures.

He gets his first big offer from Mack Sennett (Dan Aykroyd) to come to Hollywood for an astounding $150 a week to be a regular player in his Keystone comedies. Marisa Tomei plays Mabel Normand, Chaplin’s comic foil in several short films at this time. So much happened so quickly for Chaplin between 1914 and 1916 that it’s just impossible to do the story justice. The film glosses over large swathes of his life during this period and almost jumps to the making of his first feature, The Kid.

Because Chaplin’s life in Hollywood touched so many other famous names, Chaplin basically becomes a compendium of celebrities of the 1920s. After Mack Sennett and Mable Normand there’s Chaplin’s closest thing to a best friend, Douglas Fairbanks (Kevin Kline). We first meet the Fairbanks character at a Hollywood soiree he’s throwing along with Mary Pickford, with whom Chaplin and Fairbanks would eventually start United Artists, although that entire event is left on the cutting room floor. Then before you know there’s Kevin Dunn playing J. Edgar Hoover and Chaplin makes some comments at a dinner that put him squarely on Hoover’s shit list. The movie contends somewhat preposterously that this was Hoover’s motivation for ruining Chaplin later in life.

The key event at the Fairbanks party is Chaplin’s meeting Mildred Harris (Milla Jovovich), the ingénue who would become his first wife and one of several troubled romantic relationships Chaplin had in his life. Unfortunately the film misses a great opportunity to explore this aspect of his life, instead choosing to relegate a lot of it to the background. Chaplin was a known adulterer, carrying on a long-term affair with his co-star Edna Purviance (Penelope Ann Miller), but Attenborough’s film ignores this. To me it seems the Lita Grey affair is perhaps the most interesting relationship he had. She was a minor who was cast in one of his films. She got pregnant and he had run off to marry her in Mexico. His first two sons were born to her and she figures in the story as little more than a glorified footnote.

Then it’s on to the making of City Lights and there’s an example of Chaplin’s renowned penchant for shutting production down while he works out an idea – in this case he can’t quite work out how the blind flower girl mistakes the Tramp for a rich man. This is one Chaplin’s most famous examples of genius storytelling so its inclusion is just one of many things that should be on a highlight reel. Later he meets Paulette Goddard (Diane Lane) and their marriage becomes strained while he spends day and night toiling away at Modern Times, providing an example of tortured genius and its effects on personal relationships. Finally he meets Oona O’Neill (Moira Kelly), his final wife with whom he fathered 8 children (including Geraldine).

For obvious reasons this marriage is given much more resonance than the others. After all, Oona was with him until he died. One of Attenborough’s best decisions in the film was casting Kelly as both Oona and Chaplin’s early love interest in England, the dancer Hetty Kelly. Chaplin apparently never got over the loss of Hetty when he left for America. He later learned of her death from the flu epidemic when he returned for a visit to England in 1921. Having the same actress play both roles ties together the two women physically, offering a touching, if facile explanation for why he remained so long with Oona when his other marriages deteriorated so quickly.

Attenborough tries his best to overcome the shortcomings of the staid Gandhi by making this film a bit more theatrical. As Chaplin describes his creation of the Tramp (a completely bogus story to cover for the uninteresting truth), Attenborough employs cheap special effects to show the bowler hat glowing before Chaplin’s eyes and the cane literally jumping out to him. In a scene in which Chaplin and his brother whisk the film stock for The Kid out of state to finish it before Mildred Harris can claim half of it as her own in the divorce settlement, Attenborough stages an absurd chase scene at high speed – an attempt at recreating the flavor of an old Chaplin one-reeler that doesn’t quite fit in with the style of the rest of the film.

Eventually the story comes round to the accusations of Communist affiliations and Chaplin’s exile from the United States. What the film fails to do is find any kind of honed focus on one aspect of Charles Chaplin the man. There are many stories to be told from his life, any one of them as interesting and ripe for film study as the next. Chaplin could have decided to focus the story on his serial marriages and infidelities; his artistic temperament and creation of the Tramp character and how those things affected his life; his political leanings and how they contributed to his vilification by the U.S. government. Instead the film tries to cover all these topics and more leaving a feeling of emptiness where we get a slight sense of Chaplin and some of the well-known things he did, but without much depth.

The attempted resolution to this issue might be the inclusion of scenes at Vevey, Switzerland, in the early 1960s with Chaplin putting the finishing touches on his autobiography with his editor, the fictional George Hayden (Anthony Hopkins). These scenes provide the occasional narrative voice to come forward and provide motivation and background information that was not otherwise more creatively included. George digs in and asks Charlie pointed questions that are meant to illuminate some of his decisions throughout his life. They might have done Chaplin’s life more justice had they excised these scenes in favor of a little more development of his early Hollywood life.
at April 10, 2012